So why did Erin not know that she was pregnant? Erin didn’t have any visible signs of pregnancy like other pregnant women. She didn’t have a baby bump, no morning sickness, and all her clothes fit well. 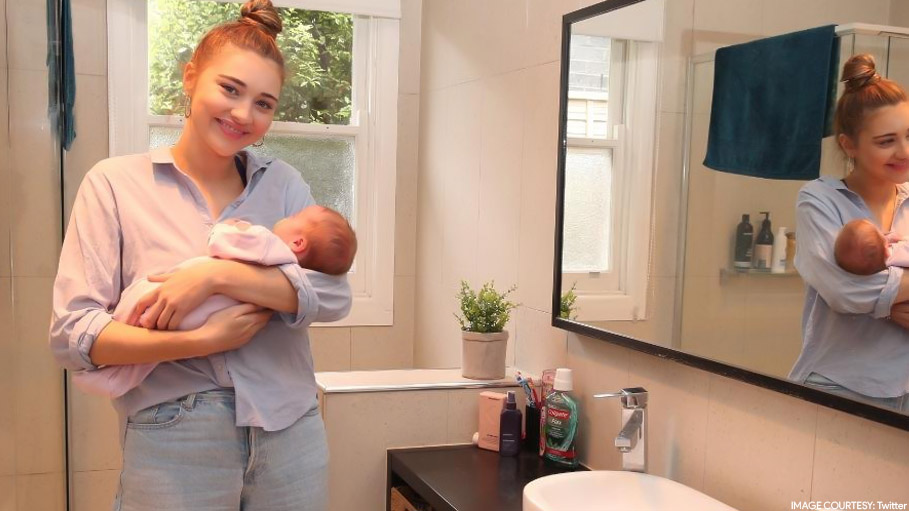 Model Erin Langmaid is making headlines for giving birth to a baby in the bathroom. The shocking part of the whole incident is that she was not aware that she was pregnant for the whole nine months!

Her husband Carty heard her screams from the bathroom and when he entered the bathroom he saw Erin with the newborn baby in her hands, he told 7 News.

According to 7 news, Carty called the emergency services and spoke to the operator requesting immediate help. He told the operator that the mother was fine but the baby was turning blue. The operator successfully guided him over the phone and ultimately the little baby girl turned out to be healthy. She’s been named Isla.

According to Erin, the birth was the “beginning of a tough time” though. Yes, it would have certainly been tough as the parents were not prepared for this completely strange event. These pregnancies are called ‘stealth pregnancies’ or ‘cryptic pregnancies’. They are not very common but not unheard of. There’s even a TLC show called ‘I Didn’t Know I was Pregnant’ that is based on such pregnancies.

There have been similar stories where women were unaware that they were pregnant. A 23-year-old woman went to the local ER for lower back pain however when she did the routine pregnancy test, the results turned out to be positive. Fortunately, she gave birth to a healthy baby boy.

As the name suggests, questions regarding the cause of it and who experiences it still remains unknown to the medical community. Some of the reasons why certain pregnancies go unnoticed are because the placenta is positioned in such a way that the mother may not identify the baby’s movements. It can be very confusing and scary for mothers who undergo ‘cryptic pregnancies.’

According to the chairman of the obstetrics and gynecology department at Sibley Memorial Hospital in Washington, he’s seen cases where women didn’t realize they were pregnant because they were overweight but Erin Langmaid’s case stands out in medical history.