Despite moves by some Arab countries, not including Qatar, to normalise relations with Israel, the Palestinian cause is being embraced by many Arab fans. 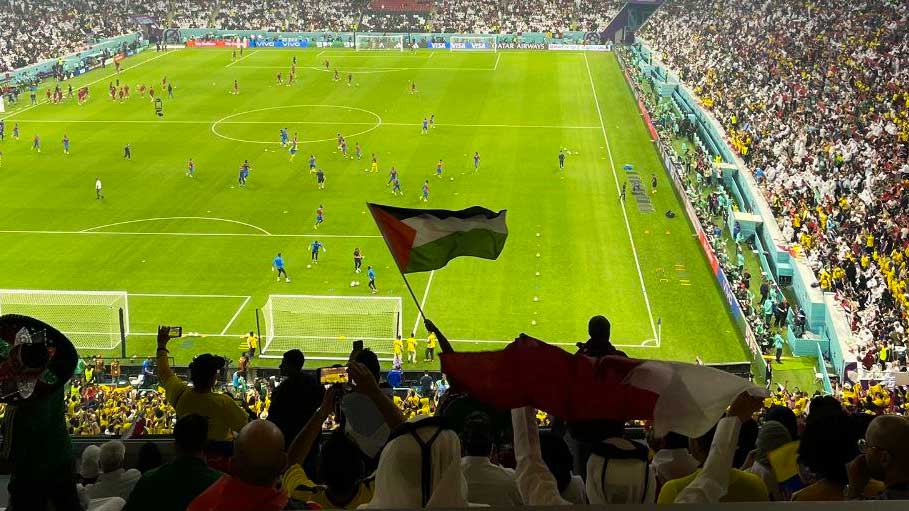 Doha: Palestinian flags are flying everywhere in Qatar but Israeli fans are staying low-key as the Israeli-Palestinian conflict makes its presence felt at the first World Cup on Arab soil.

Despite moves by some Arab countries, not including Qatar, to normalise relations with Israel, the Palestinian cause is being embraced by many Arab fans and some officials.

Terse interactions between Arab supporters and Israeli media have gone viral, including footage shot by an AFP journalist of a Saudi fan berating an Israeli TV reporter that has been viewed more than 5.4 million times on Twitter.

"There is only Palestine, there is no Israel... you are not welcome here," the fan shouts at Moav Vardi, a reporter for Israel's public broadcaster Kan.

The Arab fans flooding Qatar have been refusing to speak with Israeli media, while some yell "Long Live Palestine" in front of Israeli television cameras.

"We find it very difficult to work here," Vardi told AFP, adding that he understood the Arab anger.

Many Qataris have put the Palestinian flag next to their own national emblem, hanging from the windows of their luxury cars.

Some Qataris sitting in a stadium VIP section have worn armbands showing the Palestinian keffiyeh head-dress, while the Palestinian song "Ali Al-Keffiyeh" (Raise Your Keffiyeh) is regularly played in fan zones.

"Some foreigners do not know the Palestinian flag and ask us about it," said Yahya Abu Hantash, a 33-year-old Palestinian living in Doha.

"This is a golden opportunity to introduce our cause," said Abu Hantash, who wore a Qatar football shirt while holding a Palestinian flag.

Qatar has no relations with Israel and remains a supporter of the decades-long Palestinian cause for statehood.

The wealthy emirate also provides vital financial aid to residents of the Gaza Strip, which has been under an Israeli-led blockade since 2007.

Qatar criticised moves by other Arab nations -- including the United Arab Emirates, Bahrain and Morocco -- to normalise relations in 2020.

While Palestinian symbols are ubiquitous, an Israeli fan, who gave his name as Haim, said Qatar was his fourth World Cup but the first where he has not brought the national flag.

"I feel like I'm watching the World Cup in disguise. The atmosphere towards us is hostile," said Haim, who has also taken off the silver Star of David that normally hangs around his neck.

Haim, 57, came with his two sons on a charter flight from Tel Aviv airport operated by a Cypriot low-cost carrier.

About 10,000 Israelis are expected in Qatar for the football tournament, according to diplomat Alon Levy who was in Doha to organise consular coverage.

FIFA hailed a deal allowing Palestinians and Israelis to travel to the Gulf emirate on special charter flights from Tel Aviv as a platform "to improve relations across the Middle East".

Qatar insisted that Palestinians be allowed to travel with Israelis as a condition for allowing the direct flights, which will stop after the December 18 World Cup final.

Travel officials indicated there were no Palestinians on the first two direct flights, although some were expected on the third, flying on Tuesday.

A Palestinian official, who requested anonymity, said "no one" spoke about the flights agreement with the Palestinian Authority, which is based in the Israeli-occupied West Bank. "We learned the news from television."

Israel has occupied the Palestinian territories of east Jerusalem and the West Bank since the 1967 Six-Day War fought with Arab nations.

Most Palestinians get to Qatar through Jordan or Egypt, as Israel severely restricts access to Tel Aviv's airport, the official said.

About 250,000 Palestinians live in Qatar which has a population of around 2.9 million, most of them foreigners.

Together with fans who number in the tens of thousands, at least, from other Arab countries including World Cup participants Saudi Arabia, Tunisia and Morocco, pro-Palestinian support is strong.

Suhaib Al-Issa, a 16-year-old Jordanian, said flying the flag was a sign of "peaceful resistance to express our rejection of normalisation with a country that occupies Palestine".

The Qatar government did not immediately comment on the handling of Israeli nationals during the World Cup.