According to the government report, the number of pigs killed in Spain has crossed 50 million limits for the first time and which is more than the present population of Spain, which is 46.5 million. 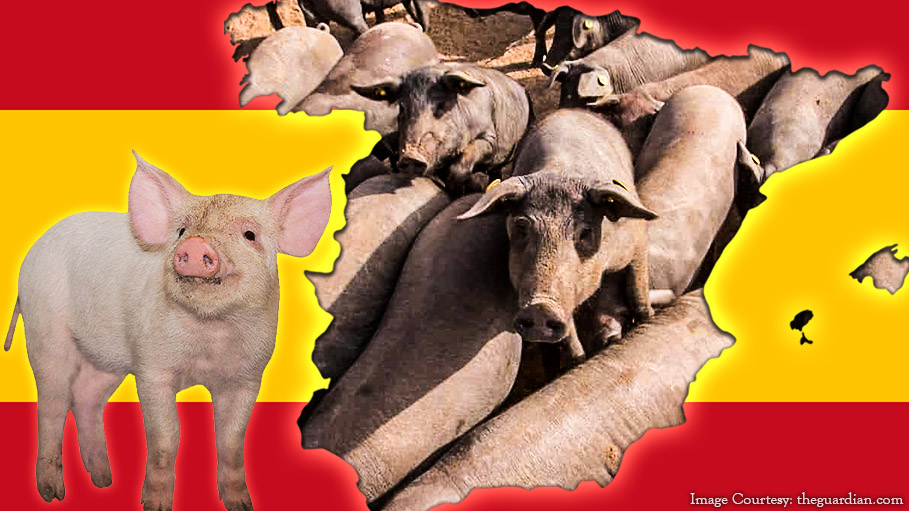 Spain’s Environment Ministry has released figures recently which shows, for the first time the pigs have outnumbered the human population of the country, as now there are 50 million pigs in Spain according to the survey and which is 3.5 million more than humans.

According to the government report, the number of pigs killed in Spain has crossed 50 million limits for the first time and which is more than the present population of Spain, which is 46.5 million.

According to a market survey, Spain’s pork industry has produced more than 4 million tonnes of pork product last year and generated 6 billion Euros. There has been a boom in pork exports, particularly to China, as the Chinese have an insatiable appetite for pig products and thus it has led to the increase of factory farm pigs in Spain.

Since 2013, the population of pigs has increased by 9 million in the country, which has also affected the environment. The increasing pig population has been one of the largest contributors of greenhouse gas emissions after industry, transport and electricity generation in the country. Pig farms consume large quantities of water, as each pig requires 15 liters of water a day, in a country that is frequently hit by drought. The animal waste produces nitrates, which are also contaminating the groundwater.

In the recent past, the pork production in Spain has also been hit by a series of food safety scandals. Including customer returning a worm-filled ham to a French supermarket chain. Police also has uncovered a network of illegal suppliers, where more than 50 tonnes of ham are relabeled with new manufacturing dates and are sold later. There have also been strikes by laborers at several factories over poor working conditions. Many workers in this sector are immigrants and a large number of laborers are Muslims, who do not eat pork.

In spite of all this, the total production of pork meat in Spain has grown by 20 percent in the past five years, and thus it has reached 4.3 million metric tons of meats.

Every year on an average, the people of Spain consume about 21kg of pork. The country’s love of pork dates back to thousands of years. Roman commentators have written highly about Spanish ham. During the rule of Goths in Spain, pigs were given special protection.

Later when the Muslims conquered the Iberian Peninsula, the pigs became a weapon of resistance for Christians. As eating pork in public is an issue of faith for Jews and Muslims, who had been forcefully converted to Christianity.