Global warming is accelerating the loss of Himalayan glaciers much faster than scientists previously thought. 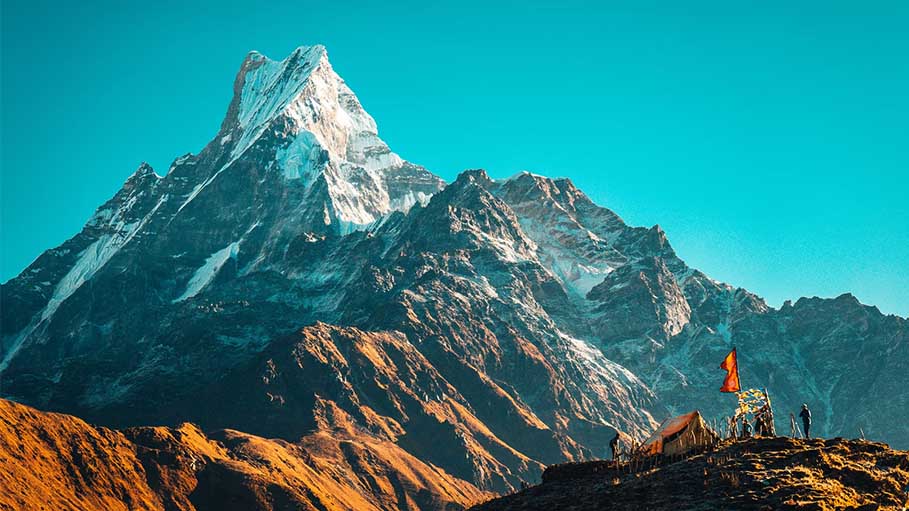 Every year, as the weather warms, teams of Indian scientists trek the Himalayan mountains to study the Chhota Shigri glacier in Himachal Pradesh.

For the past decade and a half, they've recorded the extent of snow cover, checked the temperature of the air and soil, observed the surface of ice formations and measured the discharge from seasonal snowmelt that feeds the river valleys below.

"We had installed it in June and by August we couldn't even find the remnants," said Mohd Farooq Azam, a glaciologist at the Indian Institute of Technology in Indore.

"We had an intense heat wave in early summer when temperatures in March and April broke 100-year records. And we have had resulting glacial melt. Our team was on a glacier last week and we have seen record-breaking melt in the Himalayas."

Unprecedented heat waves that swept the planet this summer are melting snow and ice not just in Europe's Alps but in the iconic Himalayan range, where the mountains shelter the largest reserve of frozen freshwater outside the North and South poles.

The impact is most acute in Pakistan, where floods have submerged farmland and cities, affecting more than 30 million people and killing upward of 1,000 since June.

There, glacial melt has added to severe monsoon rainfall driven by a warming Arabian Sea and the weather-warping effects of La Nina, creating what Pakistani officials have called a "climate catastrophe."

That deluge is just the beginning, however.

Extreme floods often lead to extreme drought. The Indus River basin, which begins in Tibet and flows through Pakistan before emptying into the Arabian Sea near Karachi, is twice the size of France and generates 90% of Pakistan's food.

When the basin floods, much of the water flows to the ocean rather than seeping into the soil, paradoxically causing water scarcity. A World Bank study estimates that by 2050, 1.5 billion to 1.7 billion people in South Asia could be vulnerable to dwindling water supplies.

The consequences are poised to reverberate through the global economy long after the flood waters in Pakistan recede, adding to a litany of harvests from Brazil to France ruined by extreme weather this year.  But disruption to a major cryosphere is also contributing to shifting global weather patterns that are warming oceans, raising sea levels and intensifying droughts, even in China.

The Himalaya, Karakoram, and Hindu Kush mountain ranges contain almost 55,000 glaciers that feed river systems on which more than 1.3 billion people rely. More than 7,000 of those are in Pakistan-occupied Kashmir (PoK) itself, where melting ice and snow has formed thousands of high-altitude lakes prone to overflowing.

"Science is very clear about the interconnectedness of the ocean and the active water cycle. Why are these two systems important? Because they regulate the earth's atmosphere," said Anjal Prakash, a research director and professor at the Indian School of Business in Hyderabad. "The system that regulates the earth's climate needs to be protected."

India's record-smashing heatwave, Pakistan's floods and accelerating glacial melt in the "rooftop of the world" could shift the tenor of climate negotiations at COP27, which is taking place in November in Egypt. There, global warming is having adverse effects on the Nile, and making life harder for farmers in its increasingly salty delta.

Developing nations, responsible for a fraction of historical greenhouse gas emissions, will push their case for more funds from industrialized countries that have prospered for more than a century at the expense of the planet. The cash is meant to both compensate poorer nations for the adverse effects and help them  adapt.

Pakistan is a glaring example. It's classified as the world's eighth most vulnerable country to climate change, but contributes 1% to global emissions of planet-warming gases, according to Mohsin Hafeez, Pakistan's representative at the International Water Management Institute.

"Pakistan will need to be more vigilant and take more measures to build capacities to deal with climate change,'' Hafeez said.  "But Pakistan cannot manage things on its own."

Floods and droughts have affected human civilizations since ancient times, but they're increasing in frequency and intensity as the planet warms.

When the earth heats up, more water evaporates and is captured in the atmosphere, creating drought and, when it finally rains, a torrent. In Pakistan, which already gets annual monsoon downpours, it means severe flooding will become more frequent. The period from January to July 2022 was the sixth-warmest start to a calendar year for the globe in records going back 143 years, according to the US National Centers for Environmental Information.

The crisis is already prompting calls for lenders to forgive Pakistan's debt to help it cope.  Even before the flood, the country was grappling with financial and political turmoil. It secured a $1.2 billion loan from the International Monetary Fund this week to avert an imminent default.

The flood damage, however, is worth upwards of $10 billion, according to Finance Minister Miftah Ismail, equivalent to nearly 3% of the country's gross domestic product last year. Swirling waters have set back the economy, affecting millions of acres of farmland, including about 40% of the country's prized cotton crop in the worst-hit province of Sindh, according to Planning Minister Ahsan Iqbal.

The lack of investment means the Tarbela and Mangla reservoirs on either side of Islamabad have become so choked with silt sweeping down from the mountains that they're less able to contain floodwaters and prevent inundation further downstream.

Pakistan may get aid to help shelter those displaced, but its financial problems mean there likely won't be much left to invest in that infrastructure.

As Chair of the Group of 77, a coalition of 134 developing countries, Pakistan, along with India and others, should make a case for loss and damages from these extreme weather events at COP27, according to Fahad Saeed, an Islamabad-based climate scientist with Climate Analytics.

"The floods this year are a wake up call for everyone,'' said Saeed. "This is the effect that a 1.1 degree Celsius rise has brought upon us. The result is climate events that are beyond tolerable levels of low and medium income nations.''

The climate clock is ticking even on the tallest peaks. The International Centre for Integrated Mountain Development in Nepal predicts the Himalayas could lose 64% of their ice by 2100 - within a human lifetime - reshaping the face of mountains that have inspired human endeavor.

The Hindu Kush Himalaya region, which stretches from Afghanistan to northern Myanmar, is home to iconic peaks, including Mount Everest and K2, which have attracted generations of explorers and climbers. Even that's changing.

Snow and ice is crashing through mountain villages, leveling hotels and this summer prompted officials in Nepal to say they planned to move the base camp for Mount Everest expeditions off the rapidly thinning Khumbu glacier as crevasses increasingly appear in the area where climbers sleep. They told the BBC they'd move the site to a lower altitude where there's no year-round ice.

"The heat waves this year and the massive floods in Pakistan are a warning," said Azam, the Indian glaciologist. "This is the point at which we human beings simply have to turn back.''