San Fransisco: Uber Passenger Refused a Mask, Then She Ripped off Driver's Mask

A video of the incident recorded from the Uber driver's security camera went viral this week after KPIX reporter Dion Lim tweeted it out, garnering over 2.3 million views by early Wednesday. 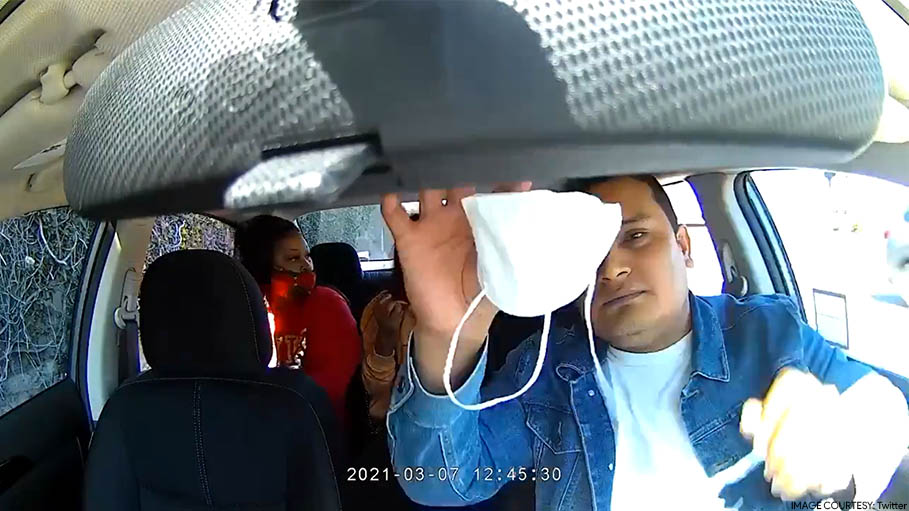 Subhakar Khadka's Uber passenger started screaming profanity and racial slurs at him shortly after he picked her and two friends up in San Francisco on Sunday. He had just stopped to let her buy a mask at a gas station, but now she was refusing to wear it.

Then, leaning toward the driver, she ripped off her mask and coughed on him several times.

"And I got corona," another passenger said, laughing. Then the woman who had coughed grabbed the driver's phone and tore his mask off his face.

A video of the incident recorded from Khadka's security camera went viral this week after KPIX reporter Dion Lim tweeted it out, garnering more than 2.3 million views by early Wednesday.

San Fransisco police said Tuesday they are investigating the incident, while both Uber and Lyft said they have banned the rider who stole the driver's mask, who has yet to be named, from using their apps.

"This behavior is completely unacceptable and goes against our Community Guidelines," Uber said in a statement on Monday.

Violent conflicts over mask policies have become commonplace since governments and companies have mandated face coverings to slow the spread of the coronavirus pandemic. In October, two sisters in Chicago allegedly stabbed a security guard 27 times when he asked them to put on a mask before entering a shoe store. Last month, a man in New Orleans fatally shot a police officer who intervened as he fought a staffer trying to stop him from entering a basketball game without a mask.

Khadka, 32, picked up the three passengers seen in the viral video around 12:45 p.m. on Sunday, San Francisco police said. After the women entered his car, he noticed one wasn't wearing a mask. He asked her to put one on but she said she didn't have one. Khadka drove to a gas station so her friend, who was wearing a mask, could buy one.

By the time the friend returned, the other two passengers were already taunting Khadka and berating him for picking them up in the first place, according to videos captured by one of the passengers and posted on her Instagram. Fed up with how they were treating him, Khadka told the women that he was ending the ride and asked them to get out of his car.

"You can get out. Please. I don't want to drive you. Please get out," he said, according to the passenger's videos. "I'm confirming it the last time. I'm going home, you are free to get out of my car."

But the passengers refused to get out and the altercation escalated. The woman sitting behind Khadka reached over him, grabbed his phone out of his hand and ripped off his mask, breaking one of the ear loops.

"You don't touch my property," he said, according to his surveillance video.

"You were going to kick us out in the middle of nowhere," she said. "Are you stupid?"

Police said that when the women finally exited his car, one of them "reached into an open window and sprayed what is believed to be pepper spray into the vehicle and toward the driver." Then they fled the scene.

Khadka told KPIX the spray was so suffocating that he had to get out of his car. The pepper spray lingered and left a blue residue in his car. After several pleas for help, Uber gave Khadka $120 to get his car thoroughly cleaned, according to messages posted by KPIX.

Khadka, who immigrated to the U.S. from Nepal eight years ago and sends money back to his family, said in an interview with KPIX that he didn't deserve to be treated that way.

He added that he believed the passengers were harassing him because he's South Asian.

"If I was another complexion, I would have not gotten that treatment from them," he said. "The moment I opened my mouth to speak, they realized I'm [not] one of them, so it's easy for them to intimidate me."

On Instagram posts apparently made by the passenger who coughed on Khadka, the woman accused him of trying to force them to exit on the freeway. She added that his "plan was to go viral from the beginning instead of just taking us to our destination," she wrote in her Instagram stories on Tuesday.

"It's always two sides to the story and [there] was a reason why he only cropped the video to 40 seconds and sent it to the news," she added. "He never wanted to show y'all what he did that [led] up to that."

In a live stream, which was recorded and posted on Twitter, the woman also admitted to assaulting him.

"All I did was smack - take his mask off and cough a little bit, but I don't even have corona," she said, before later conceding that her actions were "disrespectful" and that "I was wrong for that" for taking off his mask. "But it could have been avoided."

Lyft responded to a tweet of the live stream saying that even though the incident didn't involve their company, it was "unacceptable treatment of the driver" so they would "permanently remove the rider from the Lyft community."

In response to the video and the minimal funding Khadka received from Uber to cover cleaning and lost wages, Cyan Banister, a venture capitalist who was an early Uber investor, started a GoFundMe with a goal of raising $20,000. By early Wednesday, the page has raised almost $28,000. Banister also pledged to match the $20,000 to assist with legal fees.

"He shared his video simply because he wanted justice. He didn't expect any of us to step forward, but we did," Banister wrote after speaking with Khadka. "No person should have to go on the news and raise awareness this way to get justice but sometimes we have to be loud and we have to use our voices and influence to stick up for others around us."