17th July was National Tattoo day and you might take interest in knowing some facts and myths about tattoos. 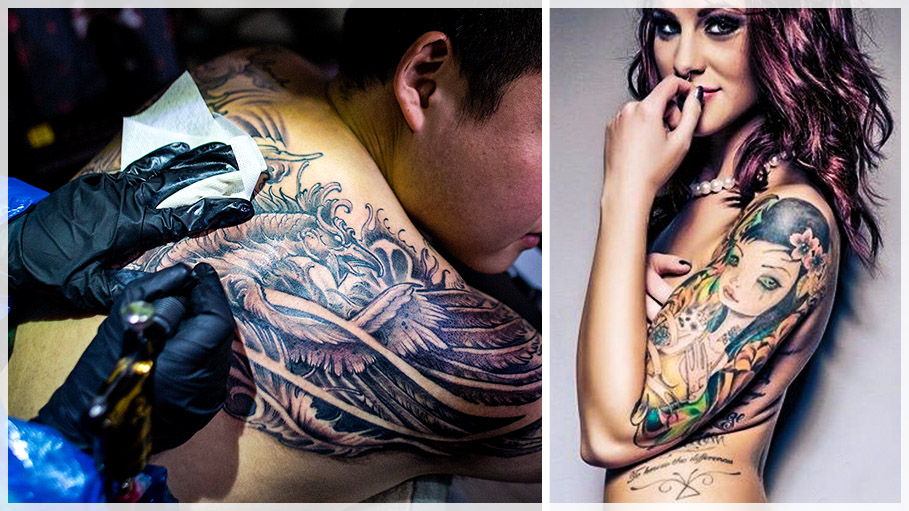 While the spirits of the Tattoo Day has just been around the corner, we have some cool tattoo stuff for you. The craze for tattoos has been in trend for years. The myths around tattoos have never stopped tattoo enthusiasts from getting a creative piece of art on body. Some believe that doing a tattoo is just not a whimsical thing but it is an addition to your personality. Study shows that a person hardly stops after one tattoo and there’s always an inclination for more.

Let’s begin with some unknown tattoo facts that you might have missed out while being in the tattoo frenzy zone.

A Dig into the History

The origin of the word Tattoo comes from Polynesia. There’s a word called “tatau” which has a literal meaning of “mark made on skin”. Digging the old records, it has been found out that there was an iceman named Otzi in the mountain of Alps. His mummy was discovered and his body had tattoos. As per the historians, this technique of drawing a tattoo was considered as a treatment for helping a person by releasing him from pain. They suggest that during that time, it was used as a form of acupuncture.

Many sailors were also found to have tattoos in the early ages. The most prevalent among them was the image of King Neptune or a sea turtle. These kinds of tattoos had a significance and it was done as a mark on the bodies of those sailors who have accomplished the task of sailing across the Equator. Later, during the times of Stalin and Lenin, there was a weird inclination of the prisoners to get the images of these leaders on their bodies as tattoos. It was not to show respect but to save themselves from getting shot as the guards had orders that they cannot shoot the images of the leaders. The tattoo machine was first invented in 1891 by Samuel O’Rilley which was an adoption of Thomas Alva Edison’s electric pen. Samuel added needles with an ink reservoir inventing the tattoo gun. Theodore Roosevelt- the 26th President of the USA had a tattoo of a family crest on his chest.

The ban on tattoos

Tattoos are still considered a taboo among many communities, though the origin can be traced back to the past. The tattoo is not considered as an art form and rather banned in countries like Iran, UAE, and Turkey till date. Tattoo experts say that even America being such a progressive Nation had fallen into the stigma and from 1961 to 1997, tattoos were considered illegal in New York. Reports are there that people used to go through imprisonment for tattoos. Reportedly, during this time many underground tattoo parlors attempted to hide from the authorities. As per reports, the government claimed that the people were suffering from Hepatitis B and tattoos were considered the reason behind it. South Carolina did not approve the tattoo art before 2004 and Oklahoma gave a nod in the year 2006.

Time for the myths to get busted

If you are asking around people if their tattoo etching has hurt them and consider their answer before taking up a decision, then experts say that you can utterly go wrong. As per a study, the first question from a non-tattooed person comes after seeing a tattoo done on someone else's, is... "did it hurt?" The pain while doing a tattoo has some important factors. The area of your skin that has more muscle or fat will relatively hurt less than that on a bone. If you choose to do a tattoo on your thighs it will hurt less than getting inked over the collarbone.

Tattoo artists suggest that after the tattoo is done, one should not come in contact of chlorine water for some days. Some have a belief that the color of the tattoo might fade if it comes in contact with chlorine. But the fact as per experts is that right after the tattoo there remains a little wound. You must let the raw wound heal to ensure that bleeding does not start again and there is less contamination.

The other most common myth is that once you get a tattoo done you are banned from blood donations. 'Give Blood England and Wales' says that there are no such obligations and you can donate blood after a prescribed time and that is just 4 months.

Taking painkillers before you visit the tattoo parlor - experts say, this is another myth that must stop now if you do not want all that extra blood profusion from the veins. Yes, some tattoos are painful but taking painkillers is definitely not the solution, especially before the tattoo. If you are doing the tattoo done by an experienced tattoo artist the pain is much lesser as they are aware of the right strokes. Aspirins usually make the blood thin and with the prick of the needle, there might be a greater blood loss than usual.

Vegans are reluctant about having a tattoo as the ink used in the tattoo gun is made out of animal bones that are burnt and processed for making the ink. But that doesn’t mean Vegans are going to quit the idea of making the tattoo. There are Vegan tattoo parlors that use organic methods to make the ink. The fact is that these vegan parlors are not easily found but yes, they exist and you will spot one if you do your research right.

There have been many speculations over the tattoo art but in spite of all bans and myths, people have been enthusiastic about doing tattoos. Some people think that tattoo is just something that remains a craze in the youth. But getting a tattoo done has nothing to do with the age. Experts suggest that the decision to make a tattoo must be done over time. The removal process is painful as it goes through laser treatments. So if you want to do a tattoo, it’s advisable you do something that you believe in and that won’t change. But again, decision making does not stop you from getting that tattoo that you have been longing for quite some time. Sometimes, you must go with the hunch and get it engraved on your body.