"I No Longer Have Freedom": The Myanmar Catholic Nun Who Faced Down a Junta

Almost a year after she knelt in the dust to beg Myanmar police not to shoot anti-coup demonstrators, Sister Ann Rose Nu Tawng still shakes at the memory of the day she says God saved her. 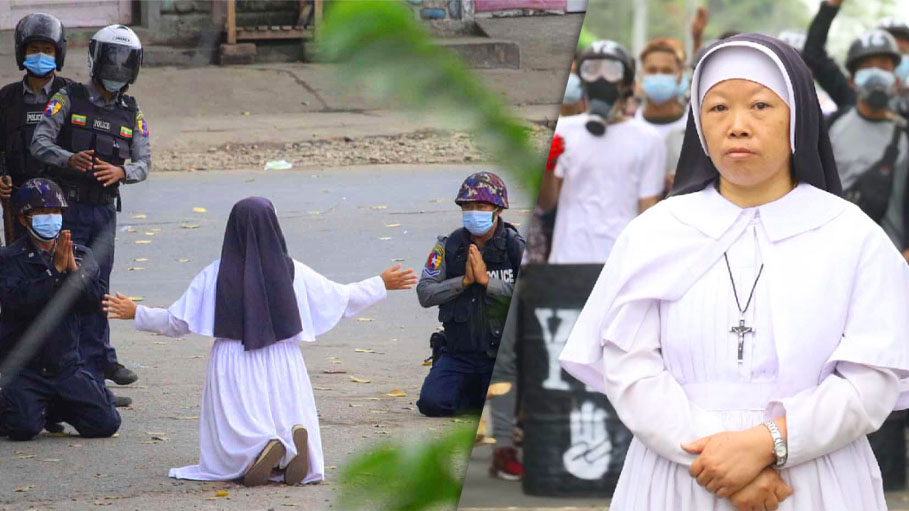 Yangon: Almost a year after she knelt in the dust to beg Myanmar police not to shoot anti-coup demonstrators, Sister Ann Rose Nu Tawng still shakes at the memory of the day she says God saved her.

A photo of the Catholic nun in a simple white habit, her hands spread, pleading with junta forces in the early weeks of mass protests against the putsch, went viral in the majority-Buddhist country and made headlines around the world.

Two people at the demonstration in early March in northern Kachin state were shot dead, with Sister Ann Rose later rushing an injured child to hospital.

In the confusion and chaos she had no idea the photo had been taken, or the impact it would have, she told AFP.

"Only when I arrived back home, I got to know that my friends and family were so worried about me," she said, adding her mother had scolded her in tears for taking such a risk.

"When I look at that photo, I can't even believe myself that I was there to save people's lives amid the chaotic shooting and running," she said.

"I believe God gave me the courage... I myself wouldn't be courageous enough to do that."

Running from the military is something Sister Ann Rose knows from her childhood in conflict-wracked Shan state in eastern Myanmar under a previous junta.

The daughter of a pastor father and a teacher mother, she was forced to flee her home when she was nine, with a fear of soldiers now imprinted in her brain that she worries is being repeated in children today.

"I used to run as a little kid when they entered the village... whenever I see soldiers and police in uniforms, I get scared, even now," she said.

But on that March day in Myitkyina "I couldn't think to be scared", she added.

"I just thought I needed to help and save the protesters."

In the following days the junta's crackdown spiralled, with Amnesty International later saying it had documented atrocities including the use of battlefield weapons on unarmed protesters.

More than 1,400 civilians have been killed and over 10,000 arrested, according to a local monitoring group.

'No longer have freedom'

Sister Ann Rose has discovered there is a price to pay for publicly standing up to the junta.

She said she has been detained several times by security forces, who asked to check her phone and took photos of her.

She is not involved with politics but is now too scared to go out alone, she added.

"I no longer have freedom," the devotee said.

The nun -- who previously trained as a nurse -- now works at camps housing displaced people in Kachin state, the site of a years-long conflict between ethnic armed groups and the military.

Fighting in Kachin and elsewhere in the north of the country bordering China has lulled recently -- analysts say at Beijing's insistence -- but elsewhere horrific violence continues.

Junta troops were recently accused of a massacre on Christmas Eve after the charred remains of dozens of bodies were discovered on a highway in the east of the country.

Seeing the bloody cycle of clashes and reprisals "it feels like my heart is going to burst", Sister Ann Rose said.

But her faith gives her hope, and a sense of purpose.