99 of 100 Cities at High Risk Environmentally in Asia

Of the 100 cities worldwide most vulnerable to environmental hazards all but one are in Asia, and four-fifths are in India or China, according to a risk assessment published Thursday. 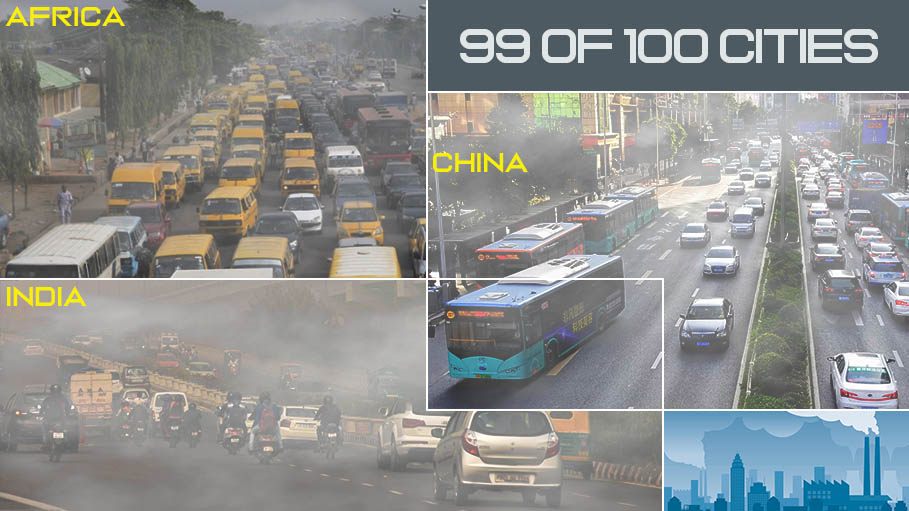 Paris, France: Of the 100 cities worldwide most vulnerable to environmental hazards all but one are in Asia, and four-fifths are in India or China, according to a risk assessment published Thursday.

Across the globe, more than 400 large cities with a total population of 1.5 billion are at "high" or "extreme" risk due to some mixture of life-shortening pollution, dwindling water supplies, deadly heat waves, natural disasters and climate change, the report found.

The sinking megalopolis of Jakarta -- plagued by pollution, flooding and heat waves, with worse to come -- topped the ranking.

But India, home to 13 of the world's 20 most risk-laden cities, may face the most daunting future of any country.

Looking only at air pollution -- which causes more than seven million premature deaths worldwide each year, including a million in India alone -- the 20 cities with the worst air quality in the world among urban areas of at least a million people are all in India. Delhi in pole position.

The air pollution assessment was weighted towards the impact of microscopic, health-wrecking particles known as PM2.5, cast off in large measure by the burning of coal and other fossil fuels.

Outside Asia, the Middle East and North Africa have the largest proportion of "high risk" cities across all threat categories combined, but Lima is the only non-Asian city to crack the top 100.

"Home to more than half the world's population and a key driver of wealth, cities are already coming under serious strain from dire air quality, water scarcity and natural hazards," the report's lead author Will Nichols told AFP.

"In many Asian countries these hubs are going to become less hospitable as population pressures grow and climate change amplifies threats from pollution and extreme weather, threatening their role as wealth generators for national economies."

Thirty-five of the 50 cities worldwide most beset by water pollution are in China, as are all but two of the top 15 facing water stress, according to the report.

But different political systems and levels of development may ultimately play in China's favour, Nichols said.

"For China, an emerging middle class is increasingly demanding cleaner air and water, which is being reflected in government targets," he told AFP.

"China's top-down governance structure -– and willingness to take abrupt measures, such as shutting down factories to meet emissions goals -- gives it more of a chance of mitigating these risks."

India's weaker governance, coupled with the size and scale of its informal economy, makes it far harder to address environmental and climate issues at the city level, he added.

When it comes to global warming and its impacts, the focus shifts sharply to sub-Saharan Africa, home to 40 of the 45 most climate-vulnerable cities on the planet.

The continent least responsible for rising global temperatures will get hit the hardest not only because of worse droughts, heat waves, storms and flooding, but also because it is so ill-equipped to cope.

"Africa's two most populous cities, Lagos and Kinshasa, are among those at highest risk," the report noted.

The climate index combined the threat of extreme events, human vulnerability, and the ability of countries to adapt.

The first in a series of risk assessments for cities, the report evaluates threats to liveability, investment potential, real estate assets, and operational capacity.