While the top tech firms Amazon, Google and Microsoft keep on adding new features and capabilities to their respective smart speakers at lightning speed, Apple is a new entrant in the overcrowded marketplace. 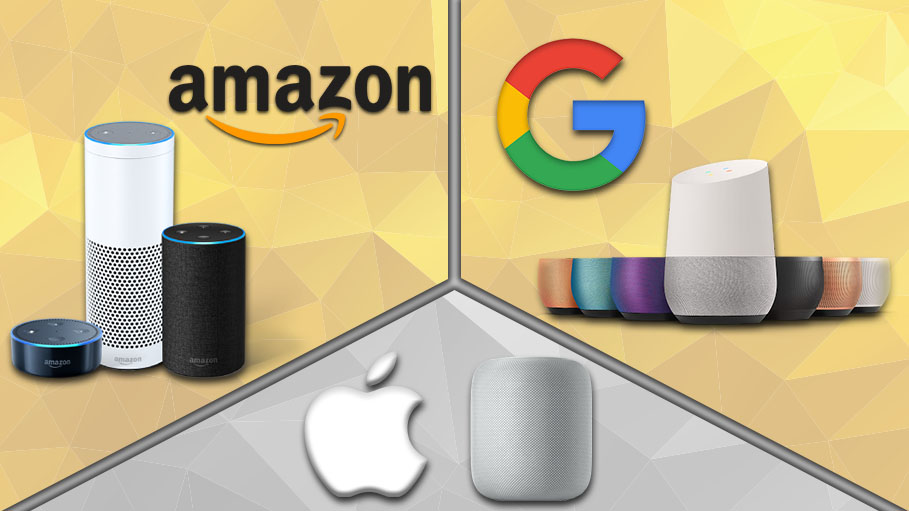 The game of the voice titans continue to create sparks as each player tries to make its own voice-controlled artificial intelligence assistant smarter than the rest. While the top tech firms Amazon, Google and Microsoft keep on adding new features and capabilities to their respective smart speakers at lightning speed, Apple is a new entrant in the overcrowded marketplace. The iPhone maker has finally followed Amazon, Google and Microsoft by launching a smart speaker powered by virtual assistant Siri. Let’s take a closer look at the details how each smart speaker is shaping up for the leadership position and why Apple is apparently losing foothold.

Smart Speaker is not Judged by Sound Quality Alone

From user perspective, it is not just the quality of sound emancipated from a smart speaker, it is a conglomeration of tasks that the gadget is able to handle. Reportedly, the most common requests to Artificially Intelligent personal assistants are to play music, book a cab, read the weather forecast and set timers or reminders. But Apple’s HomePod isn’t really a smart speaker  yet. Siri currently can’t deliver on one of those four most critical abilities, as it can only set one timer at a time.

The virtual assistants are aggressively undergoing capability enhancement and this doesn’t just depend on the sophistication of the artificial intelligence involved but also what other technology the assistant can connect with. Apple is known to work in closed framework, and considering Apple’s tendency to reject open connections to other company’s systems, it may find it has some serious catching up to do.The Niche of Amazon, Google and Microsoft

Perhaps the most popular smart speaker is Amazon’s Echo, which runs the amazing AI assistant Alexa. Since Amazon opened up its system for anyone to write software programs for it, Alexa now has over 25,000 specific capabilities or “skills” in its US version alone, up from 5,000 just over a year ago. It can now read out recipes, order a pizza, turn on the lights or narrate jokes. Partly because it was the first major smart speaker released, Echo has a greater depth of capabilities than any of its competitors.Google Home, which features the creatively named Google Assistant, can link to multiple Google accounts so you can check your calendar or manage reminders. But it also links to your Android phone so you can make calls through the speaker or view on a screen the results of Google searches you ask it to make.Microsoft has partnered with electronics manufacturer Harman Kardon to create a speaker called Invoke powered by Microsoft’s Cortana assistant. It also allows you to check your calendar and reminders, as well as make Skype calls, but only for one Microsoft account. Its AI capabilities are also not nearly as developed as either Google Assistant or Amazon Alexa.

As always, Apple is taking a different approach to its rivals, hoping to cater to the higher end of the smart speaker market and encourage premium consumers to shell out more money, as it has done very successfully with its other products. The HomePod delivers high quality sound using seven physical speakers arranged in a circle to create a virtual stereo effect, directing different parts of the sound in different directions. Having said that, on the whole it has far fewer skills as compared to Alexa, Google Assistant or even Cortana and only works with a very small number of third-party apps.Apple’s Siri is Defunct on other Devices

Even though Apple has made a delayed entry into the market, it’s superior technological and financial prowess may allow it to catch up. But the way its underlying system operates, it may not be that easy. Google Assistant is available on all Android and iOS devices, as well as Chromebooks and third-party devices such as headphones. Cortana comes standard on Windows machines but it’s also available for download on Android and iOS.Alexa is accessible through some third-party devices such as speakers (although to a lesser extent than Assistant or Cortana) and will soon be available on some Windows PCs. The most basic Amazon Echo speaker is also available for less than $40 (£40 in the UK), making it significantly cheaper than $349 HomePod. This means it is very easy for consumers to try an Echo out or even place multiple devices around their home, helping spread the technology more widely.Apple’s Siri, on the other hand, is not available on any third-party devices. So while its competitors are spreading their AI into every corner of our lives, Apple is keeping it bottled up in the company’s expensive premium products. Also, adding to the agony is the fact that any software manufacturers who are allowed into Apple’s well guarded territory, have to custom develop their products for the underlying Apple platform, but can’t even deploy them across all devices. Apple would need to mobilise a considerable number of developers to enlarge its capabilities beyond this.Support or Repair for HomePod is Way Expensive

Apple has updated its support pages to reveal that an out-of-warranty HomePod repair will cost $279 (£269). Add the shipping fee ($20 US, or £13) for a mail-in repair and you're not far off from the price of a brand new HomePod. This is one of those times where the AppleCare extended warranty ($78 if you include the incident fee, or £68) may be the better value, at least if your household is accident prone.

Homepod comes with a permanently attached strong power cable. Thankfully, the power cable won't cost such a lump sum. The 9to5Macteam has made it clear that you'll need to pay $29 (£25) to repair a damaged cord. That's more than a detachable cord might have cost though, but definitely easier to justify if your pet has scratched the cable. In practice, you're not nearly as likely to need a fix for a HomePod as you would for an iPhone or a Mac, since it's a stationary object in your home that you'll rarely need to touch. However, you'll definitely want to keep these costs in mind if you have young kids or pets or otherwise think the speaker might be rough handled.

While the craze for digital homes with smart devices is on the rise, smart homes are soon to be followed by AI in our cars and offices. As such, each player has its own niche capabilities to cash in. Amazon can get anything delivered to you. Google is already known for being able to answer almost any question and help you get from A to Z. Microsoft products can be found in almost every workplace. While each of these techie firms want to assist you everywhere, Apple is playing its cards instead on your passion for sound quality. Being an Apple fan and using several of the Apple products, I believe even though Apple’s HomePod is another technological masterpiece, the company may have to revamp its marketing strategies, improve its support package, enhance Siri’s capabilities and much more. At the moment it looks like Siri doesn’t even understand many of the questions, so expecting an appropriate answer every time, is too much of an expectation. Definitely Apple needs to think what the Master (Steve Jobs) would have done had he been around, a magical spell needed for Apple to be the winner in this game….

SEE ALSO:
Amazon Echo Powered by Alexa - Niche Features You Need to Know to Use