The nation’s shares have logged the one of the best rebound from the March lows globally while battling some of the world’s economic data. 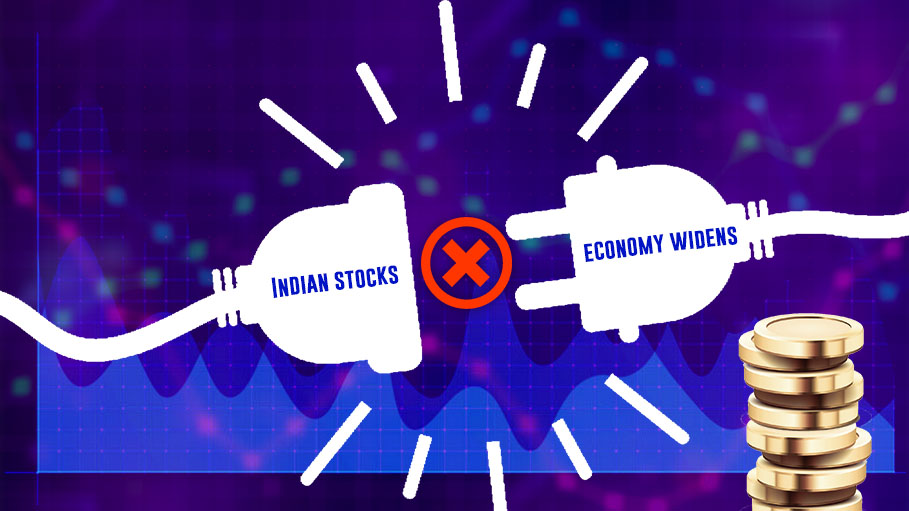 The disconnect between rallying global stocks and deteriorating data is probably the most pronounced in India.

The nation’s shares have logged the one of the best rebound from the March lows globally while battling some of the world’s economic data. The surge has pushed up valuations to a record as investors look past the grim reality and the world’s third-highest tally in coronavirus cases.

The conundrum doesn’t bode well for Asia’s third-largest economy that’s set for its first contraction in more than four decades. Further negative surprises from macro data or virus cases can unravel a rally that’s added $605 billion in market value from the depths of the swoon to outstrip the government’s stimulus package.

“Any market activity without supporting fundamentals will not sustain," said C. J. George, chief executive officer at Geojit Financial Services Ltd., a brokerage backed by BNP Paribas SA. “We are yet to see the fundamentals improving in the country."

Here’s a look at the contrast between India’s $1.9 trillion stock market and the real economy:

Just months into the new fiscal year, the fiscal deficit is close to touching its annual target, depleting Prime Minister Narendra Modi’s government firepower to add to the 21 trillion rupee ($281 billion) stimulus announced in May.

Adding salt to injury is India’s bad loan ratio, which is expected to swell to the highest level in more than two decades in 2021 following the world’s strictest lockdown measures, the central bank said last month.

In fact, the outlook for Indian businesses is the worst in the world, IHS Markit said last month. The data provider’s survey on sentiment turned negative in June for the first time in more than a decade, and many respondents were uncertain about how activity would develop over the coming year.

That raises the stakes for the rapid improvement in business activity that has been priced in, especially with the virus still running riot. The country has one of the world’s fastest growing epidemics, adding about 50,000 cases every day.

Economic activity remains in a limbo even after the gradual lifting of curbs on businesses and movement of people. While most of the large Asian economies, except China, are set to contract this year, India is set to shrink the most in that group, data compiled by Bloomberg show.

Exports and business activity did improve in June, signaling the worst may have passed, though the pace of the recovery has been slow. The latest manufacturing purchasing managers’ index showed activity remained in contraction territory in July and was worse than June, according to IHS Markit.

Meanwhile, the S&P BSE Sensex is up 45% from its March 23 low, thanks to the rising ranks of first-time investors and three straight months of purchases by foreigners.

The optimism has had the usual side effect: stocks have become expensive. The Sensex trades at 24 times one-year forward earnings, more than two standard deviations above its 10-year average. The NSE Nifty 50 Index is valued at 23.5 times.

“Market mood notwithstanding, demand aggregates appear challenging and that makes us cautious on the market," Edelweiss Financial Services Ltd.’s analysts including Aditya Narain wrote in a note last week. The brokerage sees Nifty dropping to 10,800 by June next year, or about 3% lower from Tuesday’s close.

The tougher it gets for India’s economy, the more investors expect from the Reserve Bank of India. That explains why the Sensex can keep rising even as the virus figures reach alarming levels. On Tuesday, the gauge jumped 2% at the close.

For now, investors will be watching for commentary on the economic outlook from the RBI on Thursday, when policy makers are expected to cut the key rate by 25 basis points.