Sqawkzilla, a 3-Foot Prehistoric Parrot is Recorded the Biggest Bird Ever Found

Sqawkzilla is now regarded as the largest parrot ever found on earth, which might have preyed on other birds too. 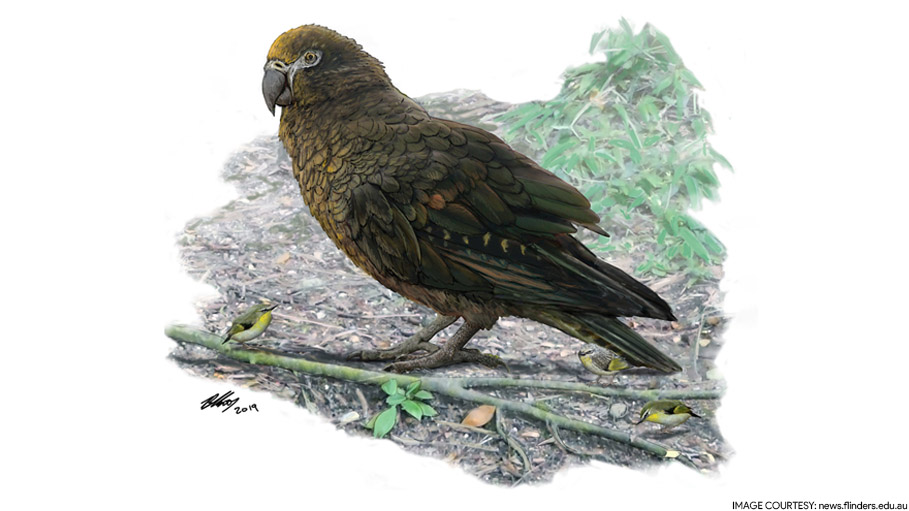 Sqawkzilla is declared the biggest bird ever found on earth after a thorough research of the collection of bird bones, found in laboratory storage for more than a decade, revealed the existence of the giant parrot popularly known as “Sqawkzilla”.

The research has been published recently, in which scientists from New Zealand revealed the discovery of the bird, scientifically named ‘Labeled Heracles inexpectatus’, which is about 3 feet in height, which means the massive bird would likely to be as tall as an average 5-year-old human kid. The bird was double the weight of the endangered Kakapo, which is the largest living parrot.

For years, geologists have been researching on various kind of enormous prehistoric birds across the world, but this discovery has shocked them all. Sqawkzilla is now regarded as the largest parrot ever found on earth, which might have preyed on other birds too.

There is also a possibility that the bird may be carnivorous like another New Zealand parrot, the Kea, which is known for its attack and munching upon living sheep.

The researchers have estimated the immensity of the bird on the basis of its two leg bones, which are scientifically called tibiotarsi, comparing the bones to the skeletons of other prehistoric and living birds kept in the South Australian Museum collection and the Smithsonian National Museum of Natural History’s electronic collection but found no bird’s skeleton is equal or bigger in size than the leg bones of the bird.

It was in the year 2008 that the fossils were dug up for the first time in St. Bathans in New Zealand, where bones of thousands of many other bird bones have been found.

At first, it was believed that the bones of Heracles were of an ancient eagle, but later during a research project in the lab of Flinders University, Paleontologist Trevor Worthy, who is an undergraduate student rediscovered the bones, thereby igniting the research for the second time by a vibrant team of researchers.

Trevor Worthy, who is also the lead author of the study said, “It was completely unexpected and quite novel. Once I have convinced myself that it was a parrot, then I obviously had to convince the world”.

According to findings, the bird lived during the Early Miocene era, which spanned between 23 million to 16 million years ago. Researchers also found that the bird probably is unabled to fly and consumed whatever is available on the ground and easy to reach.

Michael Archer, who is a co-author of the research and paleontologist at the University of New South Wales, said that the bird might have even been preying and eating other parrots too, that’s why it is given the nickname, ‘Sqawkzilla’. Archer also added that the bird had “a massive parrot beak that could crack wide open anything it fancied”.

In spite of all this, Heracles may not be the final unforeseen fossil found in the St. Bathans area. In future also we may come across many new species of birds in different shape and size. As over many years, the researchers have come across the fossils of many surprising birds and animals that once existed in this planet.