Swimming Lesson for the Football Team inside the Cave

The support of navy seal, medics, counselors, and divers are continuously present with the 12 school boys who are in the age group of 11 to 16 years and their 25-year-old football coach. 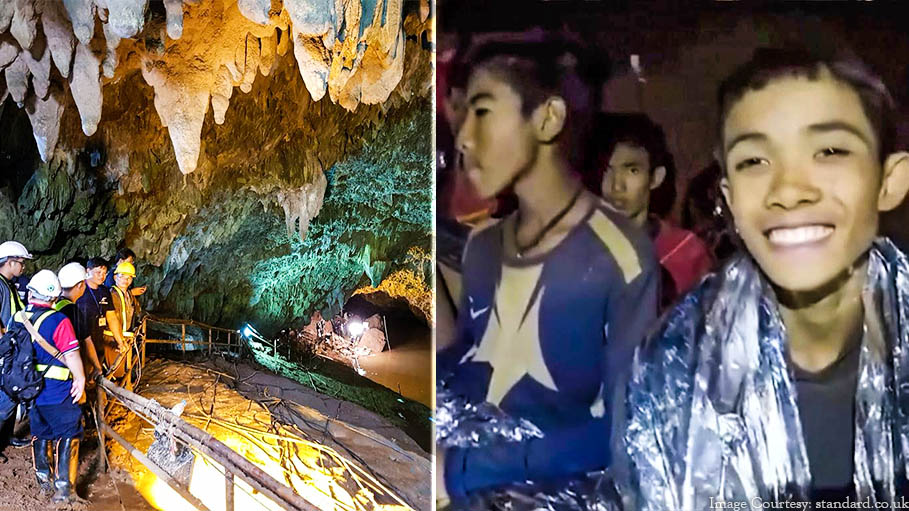 Though rescued inside the cave, the team of 12 boys and their coach are still trapped. In order to bring them out, the rescue teams are giving them lessons on diving and swimming on water along with other needed instructions and supports. As the 11-day ordeal continues, even after locating their presence and rescuing them to safety, bringing them out now seems not that easy.

The support of navy seal, medics, counselors, and divers are continuously present with the 12 school boys who are in the age group of 11 to 16 years and their 25-year-old football coach, providing them with food and medicines and continuously trying to get them out to safety, which according to the government would not be an easy task and may take some more days.

Deputy Prime Minister of Thailand, Prawit Wongsuwan said, “The water is very strong and space is narrow. Extracting the children takes a lot of people. Now we are teaching the children to swim and dive”, so that if water levels decreases and the flow of water becomes slow, they would be taken out quickly.

So far about 120 million liters of water were pumped out of the cave, but still, the water remains and therefore all the options are explored to get the team out of the Tham Luang caves of Thailand’s Chiang Rai province. As all depend on weather condition which is uncertain.

On the first day, it took three hours for divers to reach the boys located about 4 Kilometer inside the cave. According to the latest reports, water levels in some parts of the Tham Luang cave have decreased by 40cm. The authorities are trying to enhance the operation before the rain restarts, according to a forecast by local weather department, the rain is again expected by this weekend.

Governor of Chiang Rai province Narongsak Osotthanakorn said “We can't risk more flooding. We were racing against time before we found them. Now we're racing against water. It keeps seeping through the cave”. The governor also informed that the boys and their coach were patient and are in good spirit.

The international effort is involved alongside the Thai rescue teams. Teams from Australia, China, and the US are working continuously. The Australian Defense Force also confirmed to have sent two disaster recovery specialists to aid in bringing the team out of the cave.

Multiple international teams and hundreds of people are working on three fronts round the clock. First, in the Plan A, the boys are taught to dive, so that they can dive out of the cave with the support of navy divers. Plan B is to make a drain in the cave system, so that the children can come out of the cave wearing life jackets. Plan C is to do the drilling of the cave up to the place where the boys are stranded and rescue them right away.

Monsoon rains are expected to arrive again by this weekend. If the rain strikes before the boys came out of the cave, it may again raise the water levels making it impossible for the boys to come out of the cave and will be cut off from supplies and communication for four months.