Xiaomi has confirmed the launch of Redmi 5 in India on the 14th of March. The latest smartphone from Xiaomi will be available exclusively on Amazon. 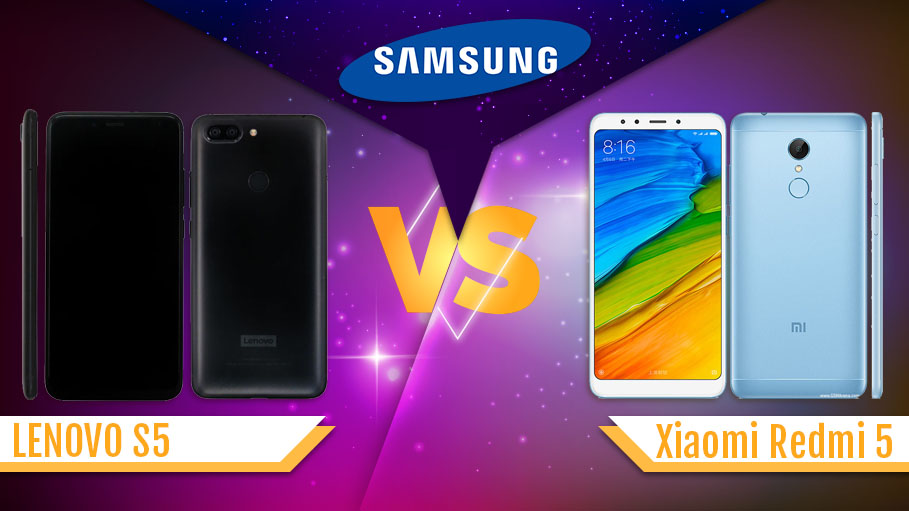 Xiaomi has confirmed the launch of Redmi 5 in India on the 14th of March. The latest smartphone from Xiaomi will be available exclusively on Amazon. According to a post from Lenovo executive Chang Cheng, Lenovo S5 will arrive on March 20 and will be a better smartphone than the Redmi Note 5. It is expected that the Lenovo S5 will be launched in the company’s mid-range price segment. The company started teasing Redmi 5 on the day of the Mi TV 4A launch, where the device appeared at the end of the launch event. The Xiaomi Redmi 5 is expected to be priced at Rs 6,999 for the 2GB RAM variant and Rs 8,999 for the 3GB RAM variant. However, we might also see a 4GB RAM model similar to the Xiaomi Redmi 4. Currently, no pricing details around Lenovo S5 are available, though we can expect to get more clarity as we approach the launch.

Notable Features of Xiaomi Redmi 5Display: The Xiaomi Redmi 5 has a 5.7-inch 1440 x 720 px display with an 18:9 aspect ratio. However, the bezels are still very visible, especially in the Gold colour variant.Chipset: Under the hood, the Redmi 5 has the octa-core Qualcomm Snapdragon 450 chipset, a 1.8GHz octa-core processor, Adreno 506 GPU, 2GB, 3GB or 4GB of RAM, 16GB or 32GB of onboard storage which will be expandable via microSD card. In fact, the Snapdragon 450 is an underclocked Snapdragon 625 chipset, which is used in the Note 5.

Fingerprint Sensor:There is a fingerprint sensor placed at the back of the phone just below the camera. However, that is mainly a signature Xiaomi decision and not due to the lack of bezels on the front.

Battery: Powering the device is a 3300 mAh battery which, Xiaomi claims has a standby time of up to 12 days. The battery is charged via a micro USB slot which means no fast charging. There is a 3.5mm headphone jack placed next to the charging port as well.Camera: The Redmi 5 has a 12MP camera at the back with 1.25-micron pixel size. The camera surprisingly only records 1080P videos at 30fps. To the front of the device is a 5MP camera with Beautify 3.0, which is Xiaomi’s software for enhanced selfies.

Though analysts believe it is highly doubtful that Lenovo S5 can compete with the unparalleled Xiaomi Redmi Note 5, but Lenovo has hinted that the S5 will be more powerful than a fifth of the Laptop. Earlier this week, Lenovo executive Chang Cheng had uploaded an invite for the S5 launch event. Now, he has shared an image of the Lenovo S5 in a post on Weibo that showcases a Red colour variant of the smartphone.

The image reveals features like a dual rear camera setup, a fingerprint scanner, and a metal unibody design. Recently, Cheng had also posted pictures of the Lenovo S5 that showcased a reflective metal body with a curved design. The front part of the handset had pointed at a 2.5D curved glass display with 18:9 aspect ratio. Interestingly, the design appears to be similar to the Lenovo K520 that was certified by TENAA earlier. The smartphone is said to come with a 5.65-inch full-HD+ display, Snapdragon 625 SoC, 4GB RAM, Android 8.0 Oreo, and a 3000mAh battery.

Samsung to Strategize on Competition from Xiaomi

With the increase in the number of smartphone manufacturers, the industry is experiencing growth. Also, the hike in competition between Xiaomi and Samsung within the smartphone market is getting into a premier level with both launching attractive offers for customers after the fiscal quarter in 2017. With the latest introduction of Samsung’s Galaxy S9 and S9 Plus, Vice President Asim Warsi for Samsung India recently gave an indication that there would be a strategy to compete with the growing competition within the smartphone market, especially when it comes to key players.

Samsung Electronics has dominated the Indian market for the last six years with the smartphone. However, towards the end of last year, the company lost a significant margin to Xiaomi. According to the Canalys report, during the last fiscal quarter, the Chinese company shipped close to 8.2 million smartphones whereas Samsung shipped 7.3 million. Overall, the South Korean tech giant still remained dominant for 2017 for its share of the Indian market, coming in at 24 percent, which was reported by International Data Corporation (IDC). However, according to the Mobilytiks report from CyberMedia Research (CMR), there was only 15.3 percent of smartphones sold by Samsung compared to Xiaomi’s 31.2 percent. CMR also reported that the sales contributed to Xiaomi’s additional Mi Home Experience store, which opened in January 2018. All indications show that the Indian market will be tailored to have price-points that include anything from flagships to basic entry-level smartphones and the competition will envy consumer's pride.