In simple terms, AI > ML > DL, and this implies Deep Learning is a subset of Machine Learning which in turn is a subset of Artificial Intelligence. Now let us delve deeper into each terminology to clearly understand what it entails. 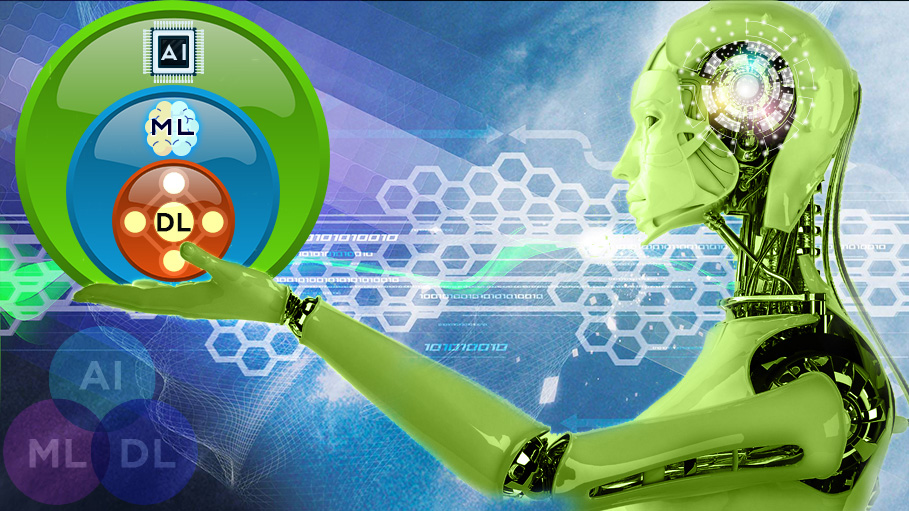 Artificial Intelligence (AI), Machine Learning (ML) and Deep Learning (DL) are fast becoming an integral part of industrial conferences, technical events and workshops because of the revolutionary changes introduced by these exponentially growing technologies. The conundrum surrounding these buzzwords is that they are often used interchangeably because of the common perception that they are quite the same thing, though they are actually not. With an honest intention of clearing out the misconception, I thought it would be a good idea to explain the relation as well as the differences through this post.

In simple terms, AI > ML > DL, and this implies Deep Learning is a subset of Machine Learning which in turn is a subset of Artificial Intelligence. Now let us delve deeper into each terminology to clearly understand what it entails.

As the name suggests, artificial intelligence is the term used to define the concept of devices carrying out tasks in a smart manner, resembling human intelligence.

If you can recollect stories from Greek Mythology about mechanical workers designed to replicate human behaviour, you will realize for how long artificial intelligence has been around. Actually, the computers manufactured in initial days were visualized as logical machines. By inducing basic capabilities in them such as memory and calculation, engineers believed they were attempting to build mechanical brains. With technological advancement and noticeable enhancement in our understanding of how the human mind works, our concept of what AI is comprised of, has changed.

In other words, Artificial Intelligence is the intelligent disposition of machines in completing tasks based on a set of rules, popularly known as algorithms, that solve problems. When a machine completes a task based on algorithms, such as moving objects, classifying images, recognizing speeches, understanding natural language and manipulating human behaviour, it becomes artificially intelligent by solving problems. The biggest example would be the image classification on apps like Pinterest.

AI does not handle increasingly complex computation, rather the work is more focused on imitating human decision-making processes and performing tasks in humane ways. The objective of AI is to simulate natural intelligence to solve complex problems, try and find the most optimal solution, thereby increasing the chance of success. It uses machine learning to reflect on the outcomes and optimizes decision making on the basis of observing its surrounding environment.

Artificial Intelligence systems are classified into one of two fundamental categories – applied or general. Applied AI is much more popular, constituting of systems designed to intelligently trade stocks and shares, or manoeuvre an autonomous vehicle. Generalized AI, on the other hand, comprises of systems or devices which can, in theory, handle any task, is not so common, but this is where some of the most interesting advancements are taking place today. In fact, it is the general AI that has led to the development of Machine Learning, based on the idea that humans can build machines to process data and those machines learn from the data on their own, without our constant supervision or intervention. AI takes the information along with past experiences and changes behaviour to produce an outcome on its own.

Machine Learning is an application of AI, often referred to technically as a subset of AI. It is based around the concept of empowering machines to get access to data and learn for themselves using the data in order to make accurate predictions. in fact, ML is simply a technique for realizing AI.

It is a method of training algorithms such that they can learn how to make decisions. Training in machine learning entails giving a lot of data to the algorithm and allowing it to learn more about the processed information.
Machine Learning uses programming through Neural Networks, which hold the key to teach computers to think and understand the world in the way humans do, while retaining the inherent advantages they hold over humans such as speed, accuracy and lack of bias. A Neural Network is a computer system designed to work by categorizing information in the same way a human brain does. It can be taught to recognize, for example, images, and classify them according to elements they contain as well as characteristics they are comprised of. Essentially it works on a system of probability. Based on data fed to a neural network, it is able to make statements, decisions or predictions with a degree of certainty. The addition of a feedback loop enables learning. By sensing or being told whether its decisions are correct or not, it modifies the approach it takes in the future.

So what triggered the evolution of ML which is the driving force behind the fast-paced development of AI? It was the realization in 1959 as credited to Arthur Samuel that instead of teaching computers everything they need to know about the world along with the what and how related to tasks, it might be a better idea to find ways to train them to learn on their own. Another factor boosting ML is the exponential growth of the internet, and the massive increase in the volume of digital information being generated, stored, and made available for analysis.

These innovations led the engineers to conclude that rather than teaching computers and machines how to do everything, it would be far more efficient to code them to think like a human brain, and then plug them into the internet to provide them access to all of the information in the world.

Machine Learning learns through training algorithms and deciding the probable consequence or result of a situation. The process necessitates a human to program the information into the ML with data, hours of training, testing and fixing issues in the outcomes and re-executing. Machine Learning applications can read the text and figure out whether the person who wrote it, is making a complaint or offering good wishes. These ML apps can also listen to a piece of music, decide whether it is a happy or sad tune, and find other tunes to match the mood. In some cases, the apps can even compose their own tunes expressing the same themes, or which they know is likely to be cherished by the admirers of the original piece.

The most common example of ML is face detection through image recognition. When shown enough photographs of a person’s face from different angles, varied expressions, lighting with different levels of brightness, subjecting to contrast and more, the ML algorithm can then begin recognizing the person more efficiently. In fact, it can determine that it is likely that person in a photo based on characteristics. Do you know Google uses ML for optimizing advertisements and Netflix uses it to provide recommendations for music and movies?

These are the innumerable possibilities offered by systems based around ML and neural networks. In a recent tech event, I learnt that the idea of enabling humans to be able to communicate and interact with electronic devices as well as digital information, as naturally as they would with another human being is being nurtured to take it to the next level. To this end, another field of AI, Natural Language Processing (NLP) is fast becoming a source of immensely exhilarating innovation in recent years, and one which is heavily dependent on ML. NLP applications attempt to decipher natural human communication, either written or spoken, and communicate in return with humans using similar, natural language. ML is used here to help machines comprehend the vast nuances in human language, and to learn to respond in a way that a particular audience is likely to interpret.

The most important thing to keep in mind about ML is that it can only output what is input based on the large datasets it is given to work upon. It can only check from what knowledge it has gained or learned over time. If that information is not available, it cannot produce an outcome on its own. Therefore, ML will go for the solution, which may not be necessarily the most optimal solution.

DL algorithms are inspired by the information processing patterns which are at work in the human brain. Just the way we use our brains to identify patterns and classify various types of information, deep learning algorithms are taught to accomplish the same tasks for machines. The human brain normally tries to decipher the information it receives, which it accomplishes through labelling and classifying the items into various categories. Whenever the human brain receives new information, it tries to compare it to a known item before making sense of it, which is the same concept utilized by deep learning algorithms. For example, artificial neural networks (ANNs) are a type of algorithms that aim to mimic the way human brains make decisions.

Comparing deep learning vs machine learning can assist you to understand their subtle differences. For example, while DL can automatically discover the features to be used for classification, ML requires these features to be provided manually. Furthermore, in contrast to ML, DL needs high-end machines and considerably larger amounts of training data to deliver accurate results.

The fact that we will ultimately develop human-like AI has often been treated as something of an inevitability by technologists. Definitely, we are moving towards that objective with increasing velocity. Much of the enlivening advances that we have seen in recent years is due to the fundamental changes in how we visualize AI working, which have been brought about by ML and DL too. I hope through this post I have helped you to get clarity on the distinction between AI, ML and DL.