Internet of Bodies (IoB) is an extension of the IoT and is the outcome of the Internet of Things (IoT) connecting with the human body. It is the inevitable development that’s taking the technology status quo by storm. 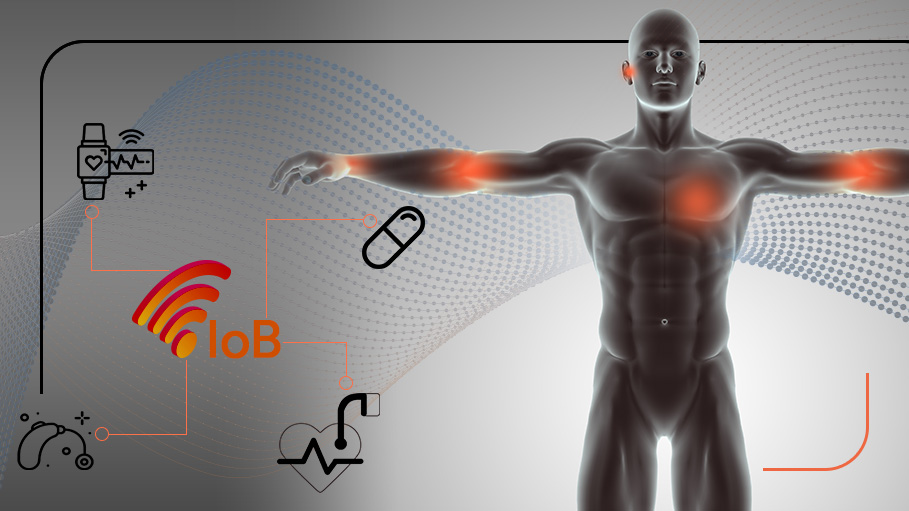 Ideation with execution and technological advancement have brought about beautiful transformation not only in the industrial ecosystem but also in modern day living. Internet of Things (IoT) has been one of the game changers of recent times. Technology leaders Amazon, Apple, Google, Microsoft, Samsung and others are investing massive amounts of effort along with resource ramp up towards research and innovation in this segment.

As you know, Internet of Things (IoT) is visualised as the network of interconnected things or devices which are embedded with sensors, software, network connectivity and essential electronics that enable them to collect as well as exchange data, making them responsive. Have you heard of Internet of Bodies (IoB)? If you just go by the literal sense of the term, it sounds quite uncanny. However, in simple words, IoT entering human body is called IoB. In this article, we explore what the Internet of Bodies encompasses, some current contextual examples in use, and a few of the challenges.

Internet of Bodies (IoB) is an extension of the IoT and is the outcome of the Internet of Things (IoT) connecting with the human body. It is the inevitable development that’s taking the technology status quo by storm. Instead of devices, appliances and other items connected to the internet as in IoT, it’s human bodies which are now connected to a network, through devices that are ingested, embedded, implanted or connected to the body in some way. Once connected, data can be exchanged, and the body and device can be remotely monitored and controlled.

The advent of IoB is expected to transform our bodies into the new data discovery platform. This whole concept may sound weird and confusing initially, but once you unravel the wonderful possibilities that IoT as an embodied intelligence holds in store, you would marvel at its power and latency.

Three generations of Internet of Bodies are as follows:

Body external: These are wearable devices such as Apple Watches, Fitbit Smart Bands and other accessories that can monitor our health.

Body internal: These include pacemakers, cochlear implants (a small, complex electronic device that can help to provide a sense of sound to a person who is profoundly deaf or severely hard-of-hearing), and digital pills (containing sensors send health data from inside you to your doctor) that go inside our bodies to monitor or control various aspects of our health.

Body embedded: These comprise of the body embedded type where technology and the human body are blended together with a real-time connection to a remote machine. An example would be the much elusive Brain Computer Interface (BCI) where the human brain merges with an external device, allowing for a real-time connection with remote computers that receive live data updates, for the purposes of controlling and monitoring. It is aimed at restoring the functions for individuals with disabilities by using brain signals rather than conventional neuromuscular pathways.

Examples of IoB Devices in Use or Development

Advancement in technology innovation, wireless connectivity, materials, and above all the demand in various segments are enabling implantable medical devices (IMD) to scale and be viable in many applications. Popular implantable devices include cardiac pacemakers or implantable cardiac defibrillators (ICDs), a small device placed in the abdomen or chest to help patients with heart conditions control abnormal heart rhythms with electrical impulses, coronary stents, hip implants, inter-ocular lenses and implantable insulin pumps.

Another IoB device is the smart pill. These pills contain edible electronic sensors and computer chips. When swallowed, these digital pills can collect data from the organs of the patient and then send it to a remote device connected to the internet. Healthcare technology firm eLucid mHealth has been awarded a pair of US patents for its recently launched Pill Connect, a smart device that aims to tackle the problem of non-adherence to medicines. The patents (numbers 9,984,213 and 10,224,116) are the first to be granted for Manchester, UK-based eLucid in the US, and arrive a few months after the launch of Pill Connect was formally announced.

Pill Connect is smartphone-enabled and automatically dispenses a pill when patients respond to a reminder via an iPhone or Android app. Additional reminders are sent via text or phone call if the patient misses a dose. It also includes a remote locking system to guard against double dosing, which is a common problem in the elderly. The device and app, which are designed for use either in the community or clinical trial environment, also provides the doctor or clinical investigator with data on a patient’s adherence pattern. According to eLucid, which completed a clinical trial with the device earlier this year, the dispenser mechanism and electronics are designed to fit onto a standard pill bottle and can handle up to 30 tablets of varying shapes and sizes.

The first digital chemotherapy pill developed by Proteus Digital Health in conjunction with Fairview Health Services and University of Minnesota Health is now in use. Proteus’s digital pill compounds chemotherapy drugs with a sensor that captures, records, and shares information with healthcare practitioners, providers as well as caregivers, with the patient’s consent, regarding the drug dosage, timing, plus other data during rest and activity, heart rate and more to help better understand their patient’s condition. According to Paul Morales, Fairview Infusion Pharmacy manager at the University of Minnesota Health Clinics and Surgery Center, considering the costs, complexity and toxicity risk for oral chemotherapy, digital oncology medicine is an exciting step forward in cancer care.

Smart contact lenses are being developed that integrate sensors and chips that can monitor health diagnostics based on data collected from the eye and eye fluid. One smart contact lens in development aims to monitor glucose levels that will hopefully allow diabetics to monitor their glucose levels without repeated needle pricks for insulin throughout the day. Thanks to US military funding, scientists at the University of Michigan are developing a contact lens that provides soldiers the ability to see in the dark using thermal imaging. The technology uses a single layer of carbon atoms, called graphene, to pick up the full spectrum of light, including ultraviolet. As a vision-based technology, smart contact lenses are also being used to explore virtual and augmented reality as well as camera technologies. Samsung is working to define a methodology to project visual information directly into the retina of the eye so that the field of vision is transformed. It functions like a tiny version of Google Glass and aimed to create a mixed reality experience. Sony has applied for a patent for a smart contact lens which can convert eye movement into electrical power, which you control through blinking your eyes. The lens can store images or video once recorded.

You may have heard of the radio-frequency identification chip that emerged in 2016 and contains details of an individual's bank details, medical history and other personal identification information whilst implanted in the body. Biohax, a leading bioengineering company, is working on implanting these chips in interested individuals.

In Sweden some people are getting subcutaneous microchips to accomplish specific tasks like enter secure buildings or book train tickets. It’s one of very few places where chip implants, which have been around for a while, have taken off in some fashion.

Employees of Three Square Market agreed to have an RFID (Radio Frequency Identification) microchip, the size of a large grain of rice, similar to what’s implanted in pets to be able to identify and locate them when they are lost, implanted in them. This chip allows an employee to gain access to the office building, pay for items at the office cafeteria with a wave of the hand at the vending machine by deducting the amount immediately from employee’s account rather than use money, log onto the computer and more.

It is quite evident that the use of the human body as a technological platform for Internet of Bodies is generating a plethora of questions to be answered at a legal, ethical and even cybersecurity levels. While providing a service to the user, the IoB enabled devices send a series of personal information relating to the health of the individuals to the controller of the device. If we consider the cardiovascular data transmitted by a pacemaker, it is very useful information for healthcare practitioners, but at the same time could be of paramount importance to an insurance provider who wants to sell insurance to the cardiovascular patients. In 2017, nearly half a million pacemakers were recalled by the U.S. Food and Drug Administration over security issues requiring a firmware update.

Thinking in terms of cybersecurity, it is quite common for hackers to hijack a web page and threaten data theft or take complete control of the page through phishing or malware attack, etc. In IoB perspective, what would happen if hacking happened to a device that controls the level of insulin in our blood? Could the hacker sabotage the device? Could he even disconnect it? What health risks can the patient be subject to? The security challenges faced by Internet of Bodies tech are like what plagues Internet of Things generally, but there can be life and death consequences when IoB devices are involved. The possibilities of misuse of the IoB generated data are unlimited if we do not formulate and apply appropriate governance around it.

Data Privacy and Protection are also of paramount importance. Questions about who can access the data and for what purpose need answers. For example, a device that monitors health diagnostics could also track unhealthy behaviors. Will health insurance companies be able to deny coverage when a customer’s IoB device reports their behavior? A cochlear implant could restore hearing, but it might also record all audio in a person’s environment. How will data privacy be safeguarded?

These concerns on data privacy and protection as well as cybersecurity will have to be answered, regulatory and legal issues will have to be resolved and policies built around the proper use of the technology. As always, the legislation may not keep pace with the technology and the IoB will not slow down its velocity towards further advancement. So, are we ready for a future in which the line between a human and a device gradually blurs?